I showed up at ISTE13, one of the biggest edtech conferences of the year, Sunday night with a great plan on how to make the most of my conference.

I had a couple of meetings setup, a few other individuals I was going to seek out, and I was also going to be distributing some content intended to get teachers to take a closer look at our products.  This post is about the process I went through in making my handouts work well.

I was armed with a few hundred Teachers.io pens and a thousand myHomework stickers to try and make an impact on upwards of 15,000 people.  Not a small task by any measure given I was going to be spending most of my time trying to network.

Attempt 1: I started out with the easiest thing possible and just started throwing small amounts of stickers and pens out on high traffic areas.  I would then wait for a few minutes and watch the behavior of the people picking up the items.  The pens were the first to go.  Too often, one person would take every pen on the table without even looking at the brand.  Even if I spread the pens out across the table with lots of spacing, they had that swipe down.  The one positive is that I quickly identified which tables were places people were stopping to look at material vs. just stashing straight in the conference bag. 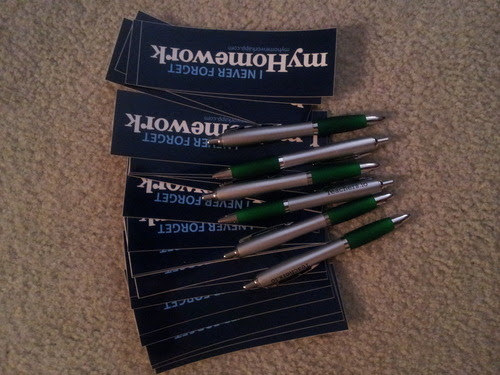 Attempt 2:  Start conversations and get permission.  These conversations were invaluable but would take as long as 15 or 20 minutes and would end with me asking if they wanted my handout.  Every time they said they did.  However, while both I and the teacher/parent would learn a lot about each other, it wasn’t a very scalable approach to getting our name out.

Attempt 3: I tried walking up to people and giving them a 20 second overview of what we did and then seeing if they wanted the pen or stickers.  A few were receptive, many were not happy that I’d interrupted their silent walk.

Attempt 4:  Try to attract walkers from a high traffic area to come to me by being a little bit like a ballgame vendor.  A few would come over, but without a bigger act ( all I had was a bag on my shoulder with some pens and stickers), most were too busy to notice or were wishing that idiot would stop shouting.

Attempt 5:  Redesign the handout and place it in the high traffic areas mentioned in Attempt 1.  I attached a pen to a few stickers.   I put some down and watched.  Sometimes, the interaction was much more thoughtful and other times it was not.  Some took as long as a minute to decide whether or not to take it.  But why? 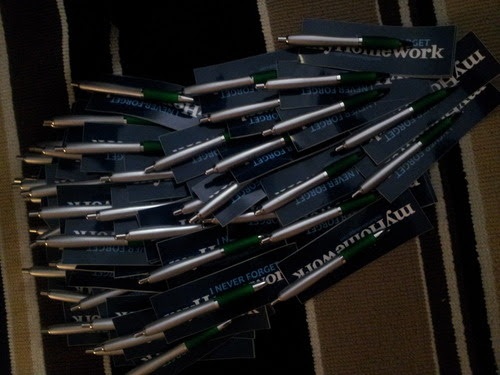 I thought about it and realized that when the pen was hiding the word “homework” was when they were having fun discovering the meaning of the handout.  So when a person could clearly see “I NEVER FORGET my” and had to move the pen to see the word homework, was when the interaction was most thoughtful.  I put some down carefully making sure the word homework was covered to test my hypothesis and watched.   Nearly every encounter took at least ten seconds.  And perhaps, even best, was that the pen hoarders were thwarted and would just take one pen leaving the stickers on the table.  I spent the last day and half loading the best tables with these handouts and

End ranking of my attempts:


One other note:  Teachers at this conference strongly preferred a pen to a  sticker and either a pen or a sticker to any type of informational flyer.

Posted by Keith Entzeroth at 2:14 PM No comments: